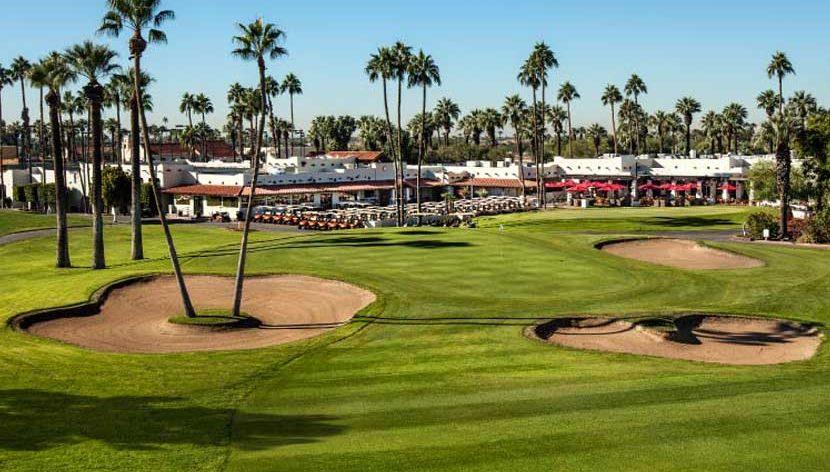 When principals at Pro Turf got the call in June to refurbish bunkers on the Gold Course at Wigwam Resort near Phoenix, they were happy to take on the job. They had done renovation work for General Manager Leo Simonetta at Wigwam before, and they were pleased to put their exclusive bunker liner called, Linebacker®, to use.

By the time the project was completed in mid-September, however, the Pro Turf team had gone from happy to ecstatic. The bunker renovation and Linebacker® installation project had turned into more of a course renovation project, thanks to the efforts of PGA Champions Tour player and golf course architect Tom Lehman. And Pro Turf was thrilled to work side by side with Lehman.

“While our Linebacker® bunker renovation was the main focus of the project, it became more of a redefining effort,” said Kip Wolfe, Vice President of Pro Turf, (a golf course care and maintenance company based in Las Vegas.) “Tom’s vision led to some new fairway lines, with re-positioning of some bunkers and the filling in of other bunkers. In the end the work gave the course an entirely new look.”

The Gold Course is the crown jewel among the three courses at Wigwam. The Robert Trent Jones Sr. design opened in 1965 and immediately received numerous regional and national accolades.

“The Gold Course at one time was known as one of the best courses in the country, and it still has the bones to be that,” said Lehman, who started Lehman Design Group in 1996. “Golf has passed it by a little technology wise and maybe design wise. We’re trying to take it back to the original feel; to give it a little variety and a different look.”

Most architects would do this from a drafting table, pencil and triangle scale in hand, reviewing site drawings and creating a blueprint for the job. Lehman used more familiar tools of his trade.

“He’s more of a visionary architect vs. someone who makes the drawings and contour lines,” said Wolfe. “His only drawings were an occasional sketch on a cardboard top off a paint box. He hit endless golf shots so he could see where he wanted the bunkers and rough lines. We’ve never worked with an architect that spent that much time making sure it was done right from the field. His passion was obvious, and it showed in the final product.”

Before the renovation project began, there were 89 bunkers on the Gold Course. Many were filled in, several were moved and nearly all the remaining 38 were reshaped and refurbished with new Linebacker® liners helping to eliminate previous drainage issues.

“Sometimes bunkers get put in simply because they look good in that position,” said Lehman. “We tried to eliminate all the unnecessary ones and use the bunkers in a way so that they mean something and become really significant strategically.

“We changed the fairway lines so they don’t have a straight bowling alley type feel. Fairway lines should pinch in at certain points and get wider in other areas. It all fits together and provides a better look.”

While many of the greenside bunkers were moved and re-shaped, the greens themselves were untouched.

“The greens are the No. 1 defense this course has so we left them totally alone,” said Lehman. “We tried to enhance and build around the greens and what they have to offer. The idea was to leave Robert Trent Jones’ intent intact.”

The project started in early July and the course reopened in mid-September. Reviews have been very positive.

“Everybody is absolutely in love with the final product,” said GM Simonetta. “I’m not a very good bunker player but I’m like Gary Player, always managing ways to get out of these things. We’ve received a lot of good accolades from our members and others who have played it.”

Simonetta was also pleased from a business standpoint. Despite the fact that Lehman was in the U.K. during the early stages of the work competing in the British Open and Senior British Open, the work was completed on time and within budget. He now has a new-look course that saves on maintenance costs.

“We constantly communicated with Tom while he was away and got through it,” said Wolfe. “Everyone seems thrilled with the work.”

The first big test for the new-look Gold Course comes Dec. 29-31 when Wigwam hosts the annual Patriot All-America. A field of 84 top collegiate players named to the PING All-America team, one player from each military academy and select international players compete in a 54-hole championship. Each player honors the military by carrying a bag with the name, rank and service of a fallen or severely wounded soldier embroidered on the pocket. Following the championship, the bags go to the players’ school for auction, with proceeds benefiting the Folds of Honor.

“The No. 1 complaint about the course in the past has been the bunkers,” said Wolfe. “It will be interesting to see what the players have to say about the course now that the work is complete.”

Pro Turf also provides course owners with other services, such as: National buying power with leading vendors; several exclusive proprietary agronomic products, policy and procedure manuals; training and educational seminars for staff; and the ability for owners to know their fixed costs when it comes to course maintenance.