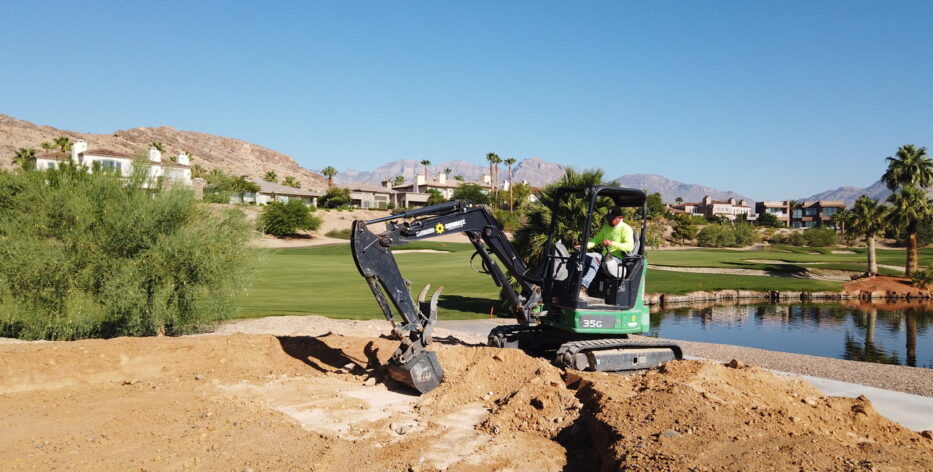 LAS VEGAS, NV (March 16, 2022) – The project itself was pretty straightforward. Build a practice green complex for bunker and short-game work next to the driving range at Red Rock Country Club. Pro Turf International, a golf course maintenance, construction and landscaping company based in Las Vegas, has created dozens of them during its 30-plus years of service.

The challenge with this particular one, however, was the location.

“The green was constructed between the driving range tee and the 18th hole, and that was the challenge,” said Jeremie Smith, PTI’s Director of Landscape & Sports Turf Operations. “Building a green large enough to handle bunker shots. Laying out the bunker in a way that allowed teaching of multiple players.

“And most importantly, building a bunker deep enough to keep mishits from flying over the green and into the 18th fairway. Those were all concerns.”

“The job went fairly smoothly once we located the exact site,” said Smith. “We finished the project on time and on budget.”

Thom Blinkinsop, Regional General Manager at Red Rock Country Club, understood the complexities. “The goal was to provide members a chipping green close to the clubhouse. PTI’s work was great.”

Another aspect of the project was to reshape the driving range and its targets, and to add bunkers on the range. The job called for installation of new irrigation valves, pipe, sprinklers and drainage. The PTI team also sprigged the driving range with 419 Bermuda grass, and built a new members teeing area on the Arroyo GC driving range tee.

The next time you are looking for an enjoyable and...