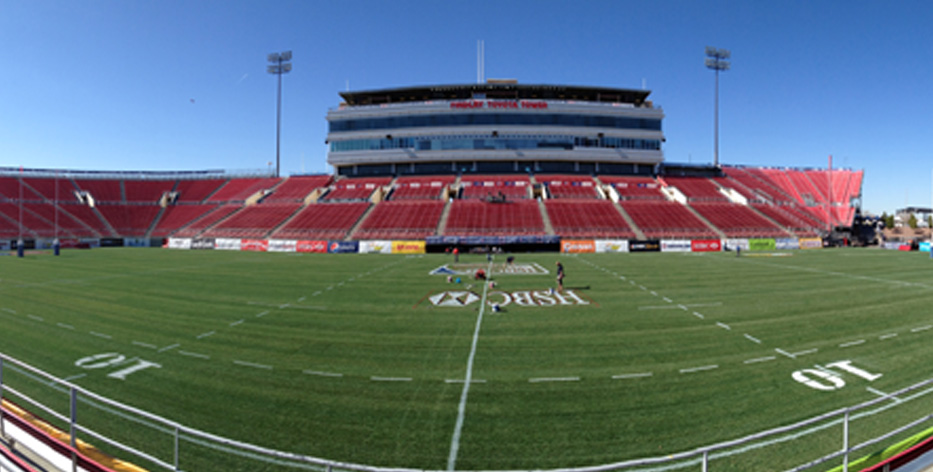 Pro Turf helps Rugby fans all across the World who are gearing up for the 2013 USA Rugby Sevens Event in Las Vegas.

Pro Turf helps Rugby fans all across the World who are gearing up for the 2013 USA Rugby Sevens Event in Las Vegas. This event is the fifth of the nine part 2012-13 HSBC Sevens World Series. Serving as the lone North American stop on the series, the Rugby Sevens is a three-day Rugby extravaganza in which fans will witness 16 national Rugby teams face off in 45 matches over the course of the event. The results of these matches decide where teams will rank in the Sevens World Series standings. Each Sevens Rugby team consists of seven players. Matches are divided into seven minute quarters that include time for pool and KO matches. The short, action packed element of these matches are a favorite among rugby fans. The entire 2013 USA Rugby Sevens Event in Las Vegas runs from February 8-10, 2013 and will be broadcasted live on both NBC and NBC Sports.

Sevens Rugby is played on a field that is the same size as a normal 15-player rugby field. The company Pro Turf has been commissioned for the second consecutive year to install grass turf over the artificial turf at Las Vegas’ Sam Boyd Stadium. The turf will need to be durable enough to survive the 43-45 matches that will occur during the 3 day 2013 USA Rugby Sevens Event in Las Vegas, which will be the largest, most greatly attended rugby tournament in North America. It is for this reason that Pro Turf was chosen yet again to take on the very important task of installing the grass sod for this big rugby event. Not many turf companies can say that they have such a sterling reputation.

Over the course of about two weeks, Pro-Turf International worked diligently to prepare the stadium for the 2013 USA Rugby Sevens Event in Las Vegas by converting the artificial turf at Sam Boyd Stadium into a high quality grass turf suitable for rugby.

To prepare for the task, Pro Turf first laid plastic over the entire field. They then installed heavy rolls of thick-cut clay sod on top of the plastic, making sure to cover the entire field. The remainder of the two week period was spent watering, feeding and keeping the grass perfectly manicured so that it would be in optimal playing condition come the day of the big event. The most important goal of Pro-Turf International is to install the sod so that there are no visible seems. This is important because the 2013 USA Rugby Sevens Event in Las Vegas will be a widely watched event that will be televised on network television. To ensure a seamless sod installation, Pro Turf decided to use a product called Ultimate Turf. This product encourages grass growth and provides a boost to the roots in the sod.

This may sound like a simple, straightforward task, but Pro Turf faced quite a few challenges while preparing Sam Boyd field for the 2013 USA Rugby Sevens Event in Las Vegas. Dealing with issues such as frozen ground and harsh winter weather cut their normal preparation times nearly in half. Despite these setbacks, Pro Turf successfully installed a beautiful turf that will be on full display at the 2013 Rugby Sevens Event.

When rugby fans tune in on February 8th, 2013 to watch the 2013 USA Rugby Sevens Event in Las Vegas, they will undoubtedly take note of the beautiful field provided by Pro Turf. This company has gone above and beyond to ensure that the sod was laid to the specifications and needs of the Rugby Sevens event. Their professional care and attention to detail will definitely be appreciated by players, coaches and spectators alike.